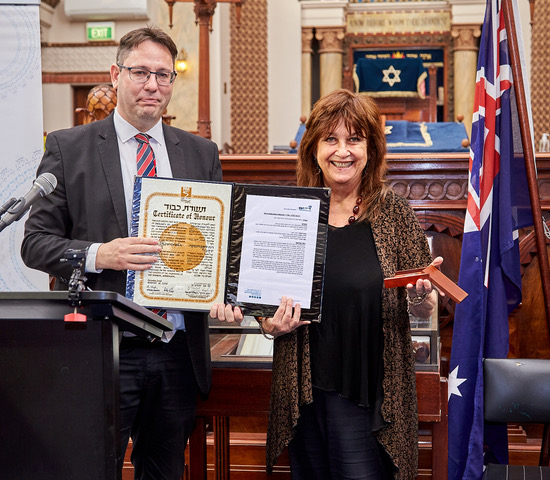 Polish Woman Recognised as Righteous Among the Nations

On 13 December 2021, in Melbourne, a Polish woman who, during the Second World War provided help to a Jewish couple, was recognised posthumously by Israel's Yad Vashem Institute, which bestowed on her the title of "Righteous Among the Nations".

Rena Makarow, a Polish Catholic woman, was living in Vilnius in 1941 when German forces invaded the city. Soon after the invasion, the Nazis began to systematically liquidate the local Jewish population.

Joseph Skowronek was a 30-year-old Jewish man from Warsaw, the only son of a well-to-do banking family. Together with his wife, who was also Jewish, he had managed to flee the Polish capital and headed to Vilnius seeking safe refuge. When the situation in Vilnius became intolerable for Jews, he contacted - through mutual friends - Rena Makarow, who organised hiding places for him and his wife. They had to move several times for safety, each time helped by Rena.

As time went by, a special bond developed between Joseph and Rena, and they fell in love. Rena gave Joseph's wife her own identity documents and assisted her in moving to a new hiding place. Once the war was over, the first wife moved to Paris and gave Rena and Joseph her blessing to start a new life together. They married, changed their name to Skowroński and eventually settled in Melbourne.

The ceremony of posthumous recognition of Rena Skowroński was organised by the Embassy of Israel in Australia and took place in the beautiful St. Kilda Synagogue in Melbourne. It was followed by a reception at the Jewish Museum of Australia.  The event was attended by federal and state parliamentarians, the Chargé d'Affaires of the Israeli embassy, Race Commissioner of the Australian Human Rights Commission, representatives of the French, German and United States embassies, as well as Jewish community leaders.

One of the keynote speakers was Ewa Collins, daughter of Rena and Joseph Skowroński, who is a member of AIPA.

None of the Polish diplomats accredited in Australia were present at the event, even though they were officially invited.