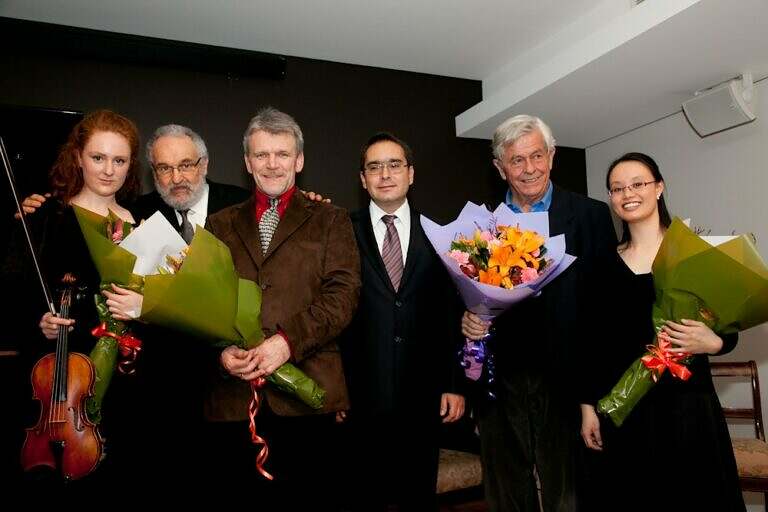 MESSAGE FROM THE EXECUTIVE COMMITTEE

The committee is very proud to present to our members a list of main events and activities that have either been initiated by AIPA, or with which the Institute has been involved in Australia and in Poland.

Melbourne: Symposium on “Migration and Multiculturalism Today: Australian and European Perspectives” co-sponsored and co-organised by the Embassy of the Republic of Poland, Monash European and EU Centre (MEEUC) and Australian Institute of Polish Affairs (AIPA) at Monash Caufield Campus

Melbourne: The Australian Institute of Polish Affairs’ organised 20th Anniversary Dinner with Guests of Honour, His Excellency Andrzej Jaroszynski, Ambassador of the Republic of Poland to Australia and Her Excellency Ruth Pearce, Ambassador of Australia to Poland. The keynote address was given by Mr. Michael Danby, MP, Chair of Parliament’s Joint Standing Committee on Foreign Affairs, Defence and Trade. To commemorate this occasion AIPA issued a special Anniversary Booklet.

Sydney: Professor Martin Krygier wrote a complaint letter to the editor of Time Off magazine regarding an article by Helen Stringer in The Looking Glass column.  The article implied that Polish people were responsible for the systematic murder of 3 million of Jewish citizens of Poland during WWII.

23/9/2012 and 30/09/2012
Melbourne and Sydney: AIPA, in co-operation with the Jewish Holocaust Museum and Research Centre, organized an afternoon of poetry and music dedicated to Władysław Szlengel, poet of the Warsaw Ghetto. The event – called What I Read to the Dead - was prompted by the recent publication of AIPA member, Marcel Weyland’s translation into English of a selection of Szlengel’s poems in a bilingual publication. The translation coincided with the commemoration of Szlengel’s death in Warsaw Ghetto Uprising in 1943. Similar event took place in Sydney with the support of the Polish Consulate General on 30/09/12

Sydney: AIPA organised a meeting with Mrs Ruth Pearce former Ambassador of Australia to Poland.  Mrs Pearce delivered a moving lecture “My life in Warsaw, the heart of Europe”.  Mrs Pearce stressed the growing importance of relations between Australia and Poland.

Sydney: AIPA initiated a meeting with Krzysztof Zanussi, distinguished film director, writer and philosopher who delivered a presentation titled “Is Europe having future, or only a past?”   His lecture in the Consulate General of Poland was well attended by 150 people.

Sydney: Vice President, Mark Burdajewicz attended a dinner hosted by the Consul General of Poland Mr Daniel Gromann on the occasion of closing of the Polish Film Festival in Sydney.  The dinner was attended by Krzysztof Zanussi, Jerzy Stuhr and film makers from Poland and Australia.

26/10/2012
Canberra: Embassy of the Republic of Poland, Yarralumla
AIPA with association with the Polish Embassy organized a lecture by Krzysztof Zanussi: ‘Walka postu z karnawałem. Polska w dzisiejszej Europie’ (‘The battle between Lent and Carnival. Poland in today’s Europe’). A reception followed.

28/10/2012
Melbourne: AIPA, in co-operation with The Australian Society of Polish Jews and their Descendants [ASPJ] organized a symposium titled WHY POLAND?: Facing the Demons of Polish-Jewish History”. The symposium was convened by Adam Warzel (AIPA), moderated by Bernard Brzegowski-Korbman (ASPJ), and was held at ‘Armargh’, Toorak. The keynote address –“ Lifting the Burden of the Past” – was given by Martin Krygier, Gordon Samuel Professor of Law and Social Theory, University of NSW. The other speakers were Adam Warzel, whose lecture was titled “Why do you hate me, brother?” and Krystyna Duszniak, whose topic was “Why was Poland Different?” The lectures are now available on our website.

12/11/2012
Melbourne: Henryk Sławik Award 2012. This annual award is bestowed by The Australian Society of Polish Jews and their Descendants to honour the memory of the great Polish diplomat, politician and humanitarian who saved thousands of Jews in the early 1940’s and was subsequently murdered by the Germans in Mauthausen concentration camp, Austria. The award is given to “an individual or organization that contributes to a greater understanding of the unique and dynamic contribution by the Polish Jewish community to the all embracing Polish culture and ethos.” This year’s award was presented at the Jewish Cultural Centre and National Library ‘Kadimah’ and AIPA was represented there by a number of its members. The 2012 award was shared by Krystyna Duszniak (AIPA member) and Lucyna Artymiuk.

12/11/2012
Warsaw: Following his nomination by AIPA, Prof. Norman Davies was awarded Poland’s highest honour, the Order of the White Eagle (Order Orła Białego) by President Bronislaw Komorowski, (the other recipients of this order were Prof. Tomasz Strzembosz and Jerzy Buzek).  AIPA President Prof Pakulski and Mrs Pakulski attended the ceremony in The Presidential Palace in Warsaw.

13/11/2012
Warsaw:  AIPA members Barbara and Wojciech Zagala represented AIPA at the ceremony awarding Medal of Gratitude to Senator, the Hon John Hogg (ALP, Qld).  President of the Senate of the Federal Government, was awarded a Medal of Gratitude from the European Solidarity Centre (Europejskie Centrum Solidarności). Senator Hogg was nominated for the award by HE Andrzej Jaroszyński, Ambassador of the Republic of Poland in Canberra, in recognition of the great support that he gave, as a union worker in the 1980’s and 1990’s, to Poland’s Solidarnośc Union, especially during the years of martial law.

15-16/11/2012
Warsaw:  President of AIPA, Jan Pakulski gave a lecture at a sociology conference organized by the Polish Academy of Sciences (PAN). The theme of the conference was “The social and cultural consequences of Polish migration” (‘Społeczne i kulturowe skutki migracji z Polski’), the title of Prof. Pakulski’s paper being ‘Emigrants and their homeland. Polish-Australian society in the midst of change’ (‘Emigracja i Kraj. Polonia australijska w procesie przemian’). In his paper Prof Pakulski characterized AIPA as a new type of expatriate Polish association.

Sydney: Radio SBS broadcast a talk by AIPA Vice President, Mark Burdajewicz on the occasion of 70th Anniversary of  the official Note of the Polish Government In Exile delivered to the governments of the United Nations on December 10th, 1942 regarding the mass extermination of Jews in German occupied Poland.  The document was based on on detailed first-hand eyewitness account of the horrors of the Holocaust.

01/12/2012
Sydney: AIPA with the assistance of the Consulate General of the Republic of Poland organized a commemoration of the 70th anniversary of the publication of the Polish Government’s Official Note regarding annihilation of Jews in Poland.  The event also commemorated life of legendary courier Jan Karski’s who took his reports to London and Washington. The keynote address was delivered by Prof John Besemeres from ANU, followed by the film “Karski and the Lords of Humanity”, a short documentary of interview with Karski and musical part by accomplished pianist Mr Wojciech Wisniewski.

Sydney: AIPA in conjunction with the Consulate General of Poland organised lectures and conversation with two sociologists: Prof Jan Pakulski of the University of Tasmania and Prof Danuta Zalewska of the University of Warsaw.  The theme of both presentations was sociological challenges of the post-communist Poland and alienation of youth in the 21st century.

Melbourne: “Is Polish Democracy under Threat?” – the first Inaugural Andrzej Ehrenkreutz lecture established in honour of AIPA founder, Professor Andrew Ehrenkreutz was presented by AIPA guest Mr Jerzy Surdykowski, who was active in the democratic opposition during Poland’s communist years.

Sydney: Minister of Foreign Affairs of Australia Mr Bob Carr invited AIPA President Prof Jan Pakulski, AIPA Vice President Aleksander Gancarz and AIPA Vice President Mark Burdajewicz to take part in a dinner on the occasion of the state visit to Australia of the Minister of the Foreign Affairs of Poland, Mr Radoslaw Sikorski.  Minister Sikorski in his address stressed the importance of strengthening of ties between Poland and Australia and a need of closer commercial contacts between the two countries.

Sydney:  A meeting of three members of the AIPA Executive followed the official functions.  Among other items discussed were arrangements of the functioning of the Executive during the absence of President, who will be on sabbatical leave in Poland till January 2014.

Melbourn: Members of the Executive Committee farewelled Consul Daniel Gromann at a private dinner function in a restaurant in Melbourne.

Sydney: AIPA guest Prof Pawel Spiewak had a lecture at the Polish Consulate General “Polska scena polityczna- blaski i cienie”.  Professor Spiewak was also interviewed at ABC Radio National by Andrew West, presenter of the “Religion and ethics report” and on 8/06/13 he had lunch and a meeting with prominent Jewish leaders at the residence of Mr and Mrs Yoram Gross.

Krakow and Warsaw: AIPA member, Marcel Weyland took part in the International Congress of Translators in Krakow.  In recognition of his work as a translator of poetry from Polish to English he was awarded by the Minister of Culture and National Heritage with the Order “Gloria Artis”.  Order “Gloria Artis” is the highest distinction given to individuals promoting Polish culture.

Warsaw: Professor J. Pakulski and Mrs Zofia Pakulski represented AIPA at a Film Festival of films produced by Yoram Gross, a great Jewish-Polish-Australian film maker. The Festival was organised at Jewish Historical Institute and opened by Professor Pawel Spiewak. It attracted a crowd of viewers and an even larger crowd of Yoram’s Friends and admirers.

20/10/2013 The former Consul General Daniel Gromann has been granted Honorary Membership of AIPA.