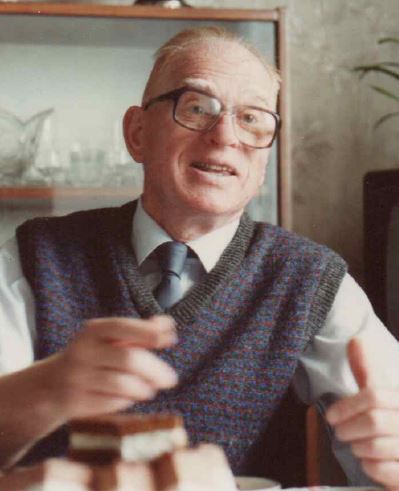 CENTENARY OF THE BIRTH OF PROF. ANDRZEJ EHRENKREUTZ

A stalwart of Polish political life in exile, a tireless champion for Poland’s freedom and independence, and co-founder of AIPA, the late Andrzej Ehrenkreutz, was born one hundred years ago.

Ehrenkreutz was born in Warsaw in December 1921 but his family soon moved to Vilnius where he was to spend the next ten years, before returning to Poland’s capital. He came from a distinguished family of academics and politicians, devoted to supporting Poland’s struggle for independence and the country’s advancement. His grandfather, the noted linguist, Prof. Jan Baudouin de Courtenay, was a candidate in Poland’s presidential elections in 1922. His father, Prof. Stefan Ehrenkreutz, the last rector of the Stefan Batory University in Vilnius, also served as a senator during the Second Polish Republic (1918–1939). His mother, the distinguished ethnologist, Cezaria Baudouin de Courtenay Ehrenkreutz-Jędrzejowiczowa, was a professor at both the Stefan Batory University and at the University of Warsaw.  She married Janusz Jędrzejewicz, Prime Minister of Poland in 1933-34. The Jędrzejewicz family home in which Ehrenkreutz spent his formative years, was one of the centres of Warsaw’s pre-war political life. It was here that his future political interests were forged.

After the outbreak of the Second World War, 18 years old Ehrenkreutz left Poland, though reluctantly,  and not without pressure from his mother and stepfather. He first headed to Romania and then to France, where he enlisted in the Polish Forces in the West (First Division of Grenadiers in Brittany). Soon after, during the Battle of Lagarde, he was captured by the Germans and spent the following four and a half years in Stalag 4B near Leipzig in eastern Germany.

After the liberation, Andrzej Ehrenkreutz and his wife Blandyna, whom he married in 1945, first headed for Palestine to join his mother and stepfather before moving to London. In 1947 he enrolled at the University of London where he studied under Bernard Lewis.  After obtaining his PhD, he moved with his family to the United States where he worked first at Yale University and then at the University of Michigan (Ann Arbor) where he spent the next thirty-five years.

While working in Ann Arbor as Professor of Islamic history, he wrote a comprehensive biography of the great 12th century Muslim warrior and sultan, Saladin.

To the Polish émigré community Andrzej Ehrenkreutz is best known for his indefatigable political work devoted to restoring freedom to communist-ruled Poland. In 1967, he became a member of the Polish-American Congress, the main Polish political and community organisation in the US.  He quickly realised that to operate effectively, the Congress must be supported by an intellectual think-tank, and in 1973, together with Kazimierz Łukomski, another stalwart of Polish political life in the US, he established Studium: The North American Studies Center for Polish Affairs, becoming its first President. Studium soon established a magazine called Studium Papers of which he became Editor in Chief. Among the better-known members of Studium were the future Nobel-prize winner in literature, Czesław Miłosz, and Madeleine Albright, Secretary of State in the Clinton administration.

Perhaps less well known is Ehrenkreutz’s pivotal role in assisting the chief lobbyist for Poland’s independence, Jan Nowak-Jeziorański, in developing valuable contacts within Washington’s political circles.  Nowak-Jeziorański, a legendary war-time emissary of the Polish Government-in-Exile, moved to Washington from Munich in 1977.  The organisational back-up provided by Studium and personally by Andrzej Ehrenkreutz, and Ehrenkreutz’s skilful liaison with the Polish American Congress, greatly assisted Jan Nowak- Jeziorański with his lobbying efforts.

In 1987, Andrzej Ehrenkreutz and his wife joined their son, Stefan, in Australia. Thus began yet another chapter in his fascinating life. In 1991, together with Halina Zandler, he developed the idea of setting up a Polish lobby organisation, conceptually akin to the North American Studium for Polish Affairs; this became the Australian Institute of Polish Affairs (AIPA). He was also instrumental in laying the foundations for Polish-Jewish dialogue in Australia. In the early years of AIPA, Ehrenkreutz was responsible for bringing to Australia, on lecture tours, such significant figures in Poland’s contemporary history as Jan Nowak-Jeziorański, Adam Michnik, Władysław Bartoszewski and Jan Karski.

Andrzej Ehrenkreutz passed away on 6 April 2008.  The secret of his success as a political activist and lobbyist was that he never equated patriotism with Polonocentrism, thereby avoiding the trap of nationalism. He had a rare gift for bringing people together.

He was an ardent patriot, a supreme political activist, a great scholar and, for those fortunate enough to know him, a close and loyal friend.

Link to the book: Saladin by A. Ehrenkreutz

Article on A. Ehrenkreutz in Sydney Morning Herald