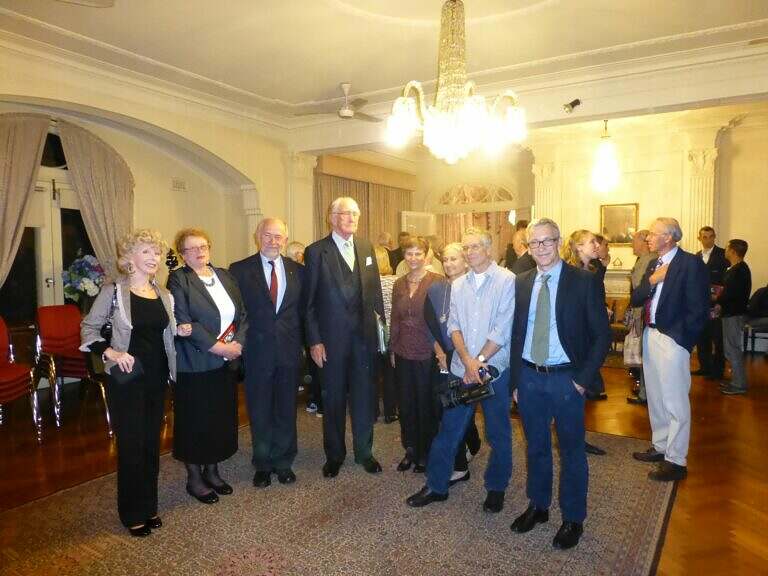 a list of events and activities that have either been initiated by AIPA, or with which the Institute has been involved in other ways, both in Australia and in Poland.

Melbourne. Several AIPA members attended an event commemorating Witold Pilecki, organized by the Jewish Holocaust Centre, and a working dinner that followed. For Witold Pilecki’s heroic bravery during WWII see, amongst others:

Sydney. Working dinner of AIPA members with directors of IPN (Institute of National Remembrance, Poland), Dr Łukasz Kamiński and Dr Rafał Leśniewicz, on the occasion of their visit to Australia. Discussed were possible forms of cooperation between AIPA and IPN.

Melbourne. Prof Jan Pakulski took part in a Round Table seminar on Ukraine, organized by Monash University, recorded by the ABC “Big Ideas” program and broadcast on 26 February.

Melbourne. Prof. Jan Pakulski was interviewed for the ABC Radio National’s program, “Flights of Fancy”, in a segment about the Smolensk plane crash in which President Lech Kaczyński and 95 other Polish officials were tragically killed.

Melbourne. Several AIPA members and guests attended a seminar at Armagh with the young Polish scholar, Dr Joanna Wawrzyniak, who spoke on the “Genealogy of Memory”. The meeting discussed issues of Polish and Eastern European cultural memory from a global perspective.

Visit of Professor Norman Davies, distinguished historian and author of many outstanding and critically acclaimed books. Prof. Davies visited Hobart, Sydney, Canberra and Melbourne as a guest of AIPA and the University of Tasmania. Prof. Davies’ main engagements are listed below.

Sydney. AIPA annual picnic at Balls Head. Several prospective members also attended. Vice President Mark Burdajewicz advised that he intended to retire from his position as coordinator of the Sydney Branch of AIPA and appealed to members to put forward nominations for his replacement.

Sydney. AIPA organized a public conversation at the Polish Consulate between Prof. Jan Zielonka of Oxford University (where he is Professor of European Politics) and Prof. Martin Krygier of the University of NSW, our member and former President . The subject was Prof. Zielonka’s newly published book, Is the EU doomed?. The lively discussion explored the main arguments of the book and reflected on their implications for Poland.

Canberra. Seven members of AIPA were invited to take part in a Round Table Discussion (Chatham House Rules) with the delegation of Polish Senators. Venue: Centre for European Studies at ANU.

Sydney. Vice president Mark Burdajewicz attended a meeting at the Polish Consulate General with the Speaker of Senate Bogdan Borusewicz.

Warsaw. Prof. Jan Pakulski met Prof. Andrzej Rychard regarding his visit to Australia as a guest of AIPA in November 2014.

Warsaw. Prof. Jan Pakulski met the Ambassador of RP in Australia, HE Paweł Milewski, and discussed with him possibilities ways of cooperating in the forthcoming year, including over the visit to Australia of Prof. Andrzej Rychard.

Warsaw. On behalf of AIPA Prof Jan Pakulski wrote a letter to the Australian Minister of Foreign Affairs, Hon. Julie Bishop, expressing his sympathy and concern regarding the MH17 Malaysia plane crash in Ukraine.

Warsaw. Barbara Zagala, past Secretary and a long time member of our Institute, has been awarded the Knight's Cross of the Order of Merit of the Republic of Poland (Krzyż Kawalerski Orderu Zasługi RP), at a Ceremony in the Presidential Palace in Warsaw.

The Order of Merit of the Republic of Poland is awarded to individuals who have rendered great service to the Polish nation. It is granted to foreigners or Polish residents abroad for significant achievements in fostering international relations between Poland and other nation-states.

Warsaw. At the suggestion of Ambassador Paweł Milewski, Jan Pakulski met Mr Andrzej Folwarczny (ex-MP), president of the organization Forum for Dialogue Among Nations, and discussed with him possibilities of cooperation between the Forum and AIPA in furthering Polish-Jewish dialogue.

Warsaw. Prof. Jan Pakulski met Zbigniew Nossowski, Editor of the monthly journal Więź, (and a guest of AIPA in 2009), and discussed with him possibilities of cooperation in publicizing the current Polish-Jewish dialogue.

Melbourne. Adam Warzel, together with Michael Koller of the Melbourne Cinematheque, prepared a submission to the Polish Consulate for funding to organize a season of films by Jerzy Kawalerowicz.

If approved, the season will be held in the second half of 2015.

Canberra. On behalf of AIPA, Vice-President Aleksander M. Gancarz helped organize the association of Friends of Chopin Australia to promote in Australia and in Poland the II International Chopin Competition at the School of Music at the Australian National University.

Warsaw. Prof. Jan Pakulski and Zofia Pakulski met an Australian parliamentary delegation (which included Michael Danby and his wife) visiting Poland at the invitation of the Forum for Dialogue Among Nations. They attended a dinner at the Australian Embassy where they discussed ways in which AIPA and the Forum for Dialogue could collaborate; this included the possibility of a visit to Australia in 2015 by Mr Andrzej Folwarczny, the Forum’s founder and President.

Warsaw. At the invitation of the Forum for Dialogue, Prof. Jan Pakulski and Zofia Pakulski joined the Australian parliamentary delegation at a special preview of the main exhibition at the Museum of the History of Polish Jews.

Canberra. Vice-President Aleksander M. Gancarz organized the visit of Dr John Besemeres (member of AIPA in Canberra) to a meeting of the Canberra Burley Griffin Rotary Club. Dr Besemeres gave a lecture on the current situation in Ukraine and this was followed by a Q&A session.

Melbourne. The Australian Centre for Moving Image (ACMI) placed on its website a 500 word blog prepared by Adam Warzel about its Polish film season (Martin Scorsese's “Masterpieces of Polish Cinema”). ACMI blogs are viewed by up to 1 million visitors a year. The blog can be viewed at:

Melbourne. AIPA members Dr Julie Fedor, Dr Malgorzata Klatt and Mrs Sophie Skarbek were panel speakers at an event organized by the University of Melbourne's School of Historical and Philosophical Studies, following the screening of Sophia Turkiewicz’s documentary “Once my mother”.

Visit of Professor Andrzej Rychard, Director of the Institute of Philosophy and Sociology of the Polish Academy of Sciences. Professor Rychard is the author and/or co-author of more than 100 scientific publications in Polish, British, Swedish, German and American professional journals, including books and monographs. Prof. Rychard’s main engagements are listed below. See also: http://pl.wikipedia.org/wiki/Andrzej_Rychard.