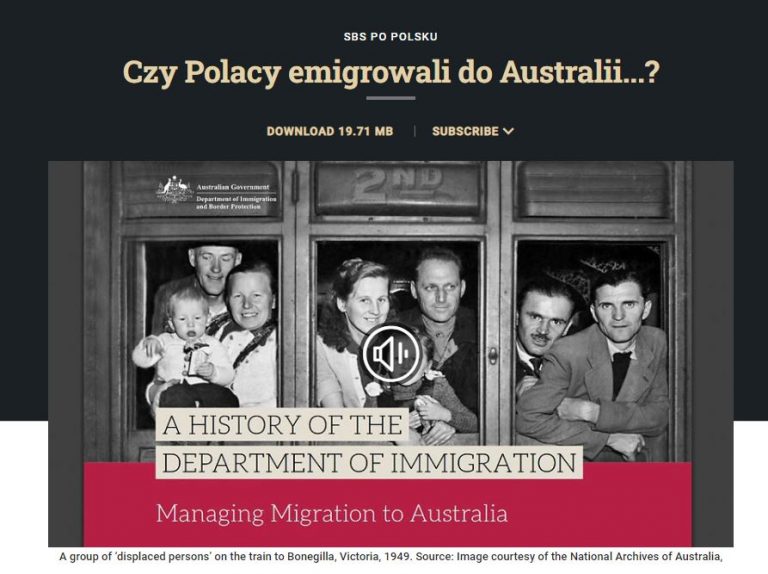 Prof. Gosia Klatt, the AIPA President, has been interviewed by the SBS Radio (Polish section) on the controversial publication of the History of the Department of Immigration on Sunday 17 October 2021.

The interview can be accessed here in Polish language.

The interview follows the letter of complaint forwarded to the Hon Alex Hawke, the Minister for Immigration, Citizenship, Migrant Services and Multicultural Affairs House of Representatives (copied below) sent by AIPA in September 2021.

Publication of the Department of Immigration and Border Protection:

A History of the Department of Immigration

I am writing to you on behalf of the Australian Institute of Polish Affairs (AIPA) with regard to a book published in 2015 by the Department of Immigration and Border Protection titled:  A History of the Department of Immigration. The book was subsequently revised in 2017. While the AIPA is supportive of publications that commemorate and celebrate Australian history, migration and multiculturalism, in the opinion of AIPA members, the current content of this book undermines its value as an authoritative source of information on the history of immigration to Australia.

According to the Introduction to the book, it ”…has been written to commemorate the 70th anniversary of the establishment of the Department of Immigration…It is intended to be brief history that captures the key events, and has relied on extensive research to ensure that the information included is as accurate as possible.”

Regrettably, in its current form the book does not fulfil its stated goals. Its main shortcoming is the omission of almost any reference to the arrival and settlement of Polish refugees, by far the largest refugee group that has settled in Australia between 1945 and the early 1980s.

These figures are confirmed by the magisterial The Australian People, An Encyclopedia of the Nation, Its People and Their Origins (1988)** edited by an eminent social researcher prof. James Jupp.

We note that A History makes explicit references to much smaller refugee-intake programs following, for example, the Hungarian Revolution (1956) or Prague Spring (1968). There are also references to comparatively smaller intakes from the Baltic countries (beautiful Balts). On page 62, the publication provides a snapshot of major humanitarian groups that have arrived in Australia.  Astoundingly, among several European groups there is no reference to Polish refugees.

It needs to be stressed that exclusion of any references to Polish refugees from the above stated DIBP publication, not only applies to the post-war years (1945-61) but extends further to the 1980s. It was during the latter period that a substantial number of Solidarity activists, escaping the trauma and oppression of martial law in Poland, arrived in Australia. The earlier mentioned The Australian People, An Encyclopedia of the Nation, estimates that between 1980 -1984 close to 16,000 Polish-born refugees arrived in Australia. By way of comparison, the number of Chileans who are frequently mentioned in the DIBP book and who arrived between 1974-81 after the Pinochet coup, numbered some 6,000***.

Finally, I would like to convey the sentiments shared by many AIPA members and urge your Department to take appropriate steps to update A History of the Department of Immigration and replenish the missing information. Without this revision, A History will remain a seriously disappointing and incomplete book.

The Australian Institute of Polish Affairs

**The Australian People, An Encyclopedia of the Nation, Its People and Their Origins, General Editor. James Jupp,  Angus and Robertson Publishers, 1988

***The Australian People, An Encyclopedia of the Nation, Its People and Their Origins (1988)