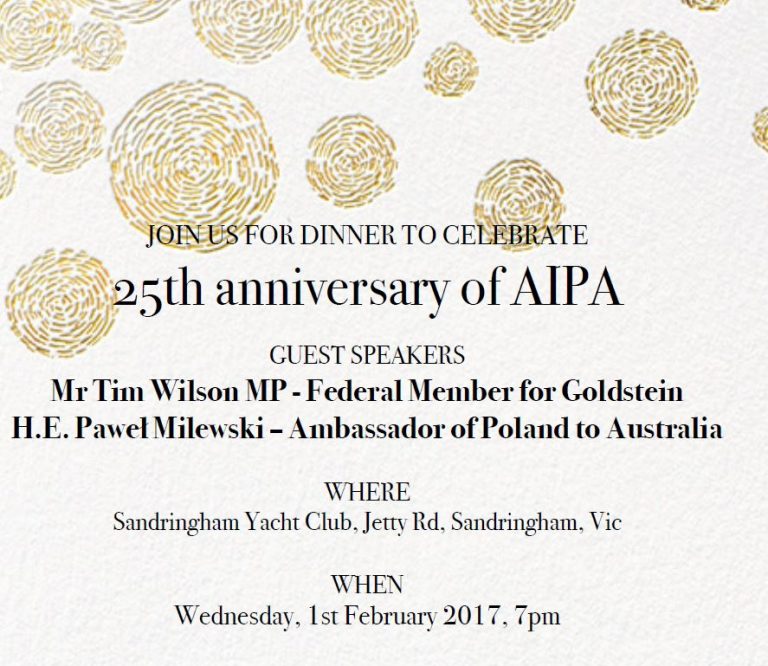 The Australian Institute of Polish Affairs (AIPA) has celebrated its 25th anniversary. On 1 February, over 80 guests gathered at the premises of Sandringham Yacht Club, to mark this important occasion. Among the guests were the Ambassador of Poland to Australia, Paweł Milewski and the CEO of Melbourne Cinematheque, Michael Koller, both of whom spoke during the function.  The Federal Member for Goldstein and former Human Rights Commissioner, Tim Wilson, was the key-note speaker.  AIPA President, Adam Warzel, reflected on the past 25 years of AIPA activities and the Deputy AIPA President, Aleksander Gancarz, read out a special message from the Australian Ambassador to Poland, Paul Wojciechowski.

I write to you from the beautiful snow-covered Warsaw to wish you all the best as you continue to celebrate the 25th Anniversary of the Australian Institute of Polish Affairs (AIPA).

I recall vividly the time when I first came across AIPA as a young Australian trainee diplomat in Canberra in early 1990s. Your activities were already a great example of successful, community-driven, second-track diplomacy. I was particularly struck by the personal commitments of the volunteers who made the AIPA visits program not only possible but a passionate expression of Polish-Australian hospitality and our spirit of curiosity and connectivity.

From my vantage point in Warsaw, AIPA continues makes a very important contribution to the relations between Australia and Poland. I’m proud to have had the opportunity to host an event in September last year for AIPA members and distinguished past visitors to Australia, which have included many highly accomplished Polish pubic figures. Many of these figures have become close contacts of the Embassy and are strong supporters of Australia in Poland and beyond.

I look forward to 2017 as potentially fruitful year in the Australia-Poland relationship highlighted by high-level bilateral visits and activities in this important for Poland Year of Tadeusz Kosciuszko. There will be a role to play for AIPA in continuing to foster people-to-people linkages and facilitate discussions on regional security challenges, political and social change, cultural links as well as economic diplomacy.

The Australian Embassy in Warsaw, and I personally, stand ready to work with AIPA in pursuit of our shared objective of broadening and deepening the already strong and warm relationship between Australian and Poland.

I wish you every success for the next 25 years.

SPEECH BY ADAM WARZEL, AIPA PRESIDENT, ON THE OCCASION OF AIPA 25TH ANNIVERSARY

First of all, let me tell you how delighted I am that so many friends and supporters of AIPA have gathered here tonight to celebrate the Institute’s 25th anniversary.

Australian Institute of Polish Affairs was established in September 1991, primarily to meet the demands coming from the Australian public and opinion-makers for objective and reliable information concerning the transformation of Central-Eastern Europe following the historic collapse of communism. This hunger for information concerned particularly Poland, which was leading the momentous process of change that occurred in 1989 , the process known also as the Autumn of Nations. As many of you recall, Poland attracted frequent media attention as far back as the early 80s, because of a spectacular rise of mass anti-communist trade-union movement Solidarnosc. There was little wonder then, that when the Solidarnosc-led change process eventually succeeded in 1989, Australian opinion-makers were keen to continue learning about this transformation. It is precisely to respond to this need and to facilitate access to relevant information, that AIPA was established.

While we are on the topic of Solidarity and the 1989 events, I would like to stress that the ideals of Solidarity, the ideals of openness, inclusion, democratic participation, have always had a special meaning for the AIPA milieu and have been strongly embedded in AIPA’s collective psyche. But it is not surprising given that most of the people associated with establishing AIPA, had been involved in various Solidarity-related activities by participating in organisations such as: Solidarity Information Bureau in Australia, Australian Solidarity with Poland Fund or the Polcul Foundation. A special mention should be made about the role of the Polish language program of the SBS Radio, which was a strong advocate of the establishment of AIPA and I am delighted to see tonight the then Coordinator of this program, Halina Zandler, who was one of the originators of the idea behind AIPA.

It’s worth reminding ourselves that one of the first decisions of AIPA was that it would act as an Australian organisation rather than a Polish organisation in Australia. This meant that AIPA would operate within the Australian mainstream rather than in a multicultural niche representing interests of one of many multicultural communities. We have decided and have maintained this position that we operate as Australian citizens rather than as Polish immigrants to Australia. The effect of this approach was that in all its dealings with Australian institutions, including: academia, media, government,  AIPA has consistently acted as equal partner. Interestingly, this approach also positioned AIPA somewhat outside the main current of Polish community life. This, as it turned out, proved to be the right decision because at that time, in the early 90s, the Polish community was rather inward-focussed, trying to discover its new identity, its new modus-operandi in this changed historical context that Poland found itself after the 1989 peaceful revolution.

No reflection about AIPA can overlook another important current in our activities and that is the development of a Polish-Jewish dialogue. Australia, and Melbourne in particular, has a very high percentage of first and second generation Jews who have come from Poland, many of whom survived the tragedy of Shoah. Polish-Jewish relations have been historically complex and often painful, but the Institute undertook the effort, not without initial risks, to open up such dialogue, because it was and still is, of a strong view that in the new environment, and particularly Polish environment , that emerged from the debris of communism, there was no place for secrecies and half-truths in inter-communal and ecumenical dialogues. I am sure that in undertaking this task, we have been greatly assisted by Australia’s openness and the policy of multiculturalism, whose one of the chief architects, I would like to remind, was AIPA inaugural President, Prof. Jerzy Zubrzycki. I am delighted therefore by the presence tonight of a number of our Jewish friends and community leaders to celebrate with us the anniversary.

I think that any reflection on AIPA’s past 25 years could not be complete without mentioning what has always been our greatest asset – our members and activists. Right from the beginning, we were joined by truly dedicated and committed people, many of whom brought with them a wealth of organisational, public relations and community development experience. What was particularly meaningful was that AIPA has attracted people who knew that in order to succeed in community work, one needs to act not only efficiently but wisely. It is worth noting that this wisdom was also instilled in AIPA by its past presidents: Professors: Zubrzycki, Ehrenkreutz, Krygier and Pakulski – I am delighted that Prof. Pakulski is here with us tonight. I would like to thank all members and AIPA activists for your great cooperation during the past 25 years. Without your tremendous effort and selfless commitment we would not have achieved what we have.

If I were to name specifically one person in my presentation, I would like this to be the late Prof. Andrzej Ehrenkreutz, a distinguished pro-independence activist from US who came to Australia in 1987. I am sure that those of you who knew him, would agree that without his vast experience, his great networking skills and most of all his wisdom which he so generously shared with us, AIPA would not be what it is today.

Since its inception, AIPA has collaborated with Polish diplomatic and consular personnel and also their Australian counterparts in Poland. We have always valued this collaboration highly as it has given our work an additional dimension and helped to broaden the scope of our work. A good example of this was the successful cooperation with Melbourne Cinematheque in screening the retrospectives of Polish film masters. I am sure that Michael Koller would attest to that. I would therefore like to take this opportunity to thank Ambassador Pawel Milewski, as the representative of the diplomatic corp, for maintaining this great and I hope mutually fruitful relationship.

I have reserved my special thanks for the end of my presentation. I would like to express particular gratitude to over 30 guests that visited Australia on AIPA invitation. We are proud that this list includes some of the most important names of Poland’s post-war history: four former prime ministers and deputy prime ministers, two former ministers of foreign affairs, chief architects of economic and political transformations, legendary human rights activists, renowned academics, film directors and people who brought the news of the holocaust to the attention of world leaders. The list is long and the names are distinguished. It is because of our guests and your great efforts to make their visits successful, that Australia knows today much more about Poland, its history, its economy, its culture and its achievements.